Here is a short overview:

Please continue reading and we will explain exactly why taking care of your car is important and can save you money (not to mention how safer and happier you will be).

Meet Irv Gordon, a 73-year-old retired science teacher from Patchogue, N.Y. He holds the Guinness world record for the most miles driven by a single owner in a noncommercial vehicle. 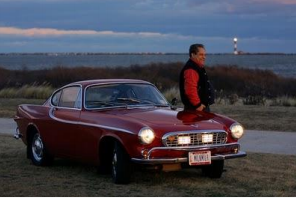 His 1966 Volvo P1800 has more than 2.99 million miles on the odometer. The car still has the original engine (although it has been preventively rebuilt twice), transmission and radio.

Do Your Regular Maintenance

Skipping regularly scheduled maintenance intervals is one of the quickest ways to assure your car finds its way to an early grave. Regular oil changes and oil, fuel and air filter changes all help make sure your car has what it needs to run without problems: clean air and clean fuel, plus fresh, uncontaminated oil to prevent wear and tear.

Simply because there is no apparent problem with the car, it doesn’t imply that everything is likely to be fine with it. An added bonus to regular service? It gives good mechanics an opportunity to spot problems before they balloon into something more serious.

If you’re wondering how often to do these things, there’s a book that explains it all to you. It’s called the owner’s manual. You’ll find it in your glove box, shrink-wrapped in plastic, because — if you’re like most vehicle owners — you’ve probably never looked at it. In the back you’ll find a list of service intervals, and the services that are recommended during each of them. If intervals in the book stop at 120,000 miles, that doesn’t mean you’re done with maintenance. Go back to the beginning and start over (so, for instance, do all the services called for in the 7,500-mile service at 127,500).

By the way, if you’re fretting over the ongoing cost of routine service, remember this: “It’s the stingy man who makes the most boat payments!”

You must clean your car often. This serves two purposes – it keeps the car spotless and glistening, and it also protects the layer of paint from dirt which can cause abrasions.

A cold engine (one that’s sat for more than five hours) will have little or no oil left on the moving parts because it has all seeped down into the oil pan. It takes only a few seconds after start-up for the oil pump to adequately lubricate an engine. During those few seconds, however, is when you should keep engine RPMs down to a minimum.

Give the engine at least 30 seconds (longer if it has sat for more than 24 hours) before popping it in gear and roaring off.

Short trips of less than 10 minutes can be particularly hard on a car, resulting in excessive wear and tear. During a short trip, your car’s engine never has a chance to reach its full operating temperature.

Here’s why it matters: One of the byproducts of engine combustion is water. When an engine reaches its operating temperature that water turns to vapor and is expunged, either out the tailpipe or the crankcase ventilation system. On a short trip, however, that water stays inside your car’s engine and exhaust. Unfortunately, water is one of only three ingredients necessary to make rust (you’ve already got the other two, oxygen and metal), and rust kills.

A further complication of condensation and water is that it dilutes your oil, which then does a poorer job of lubricating the engine. If you can’t avoid taking lots of short trips, we recommend you change your oil frequently, such as every 2,000-3,000 miles.

It’s OK to drive your car short distances with certain warning lights illuminated or gauges out of their normal range, but there are three that you dismiss at your car’s peril: the engine oil light, the engine temperature gauge and the brake light. A few minutes of an excessively hot engine or low oil pressure and the groceries you’re hauling in the back could suddenly be worth more than your car. A couple of minutes with the brake light on and you might end up playing bumper cars with the Cadillac Escalade ahead of you. The one being driven by Tony Soprano. In a bad mood.

Get in the habit of glancing at your engine’s temperature gauge and warning lights. If the lights come on, pull over as soon as it’s safe to do so and shut off the engine. Failure to heed warning may result in an expensive engine rebuild.

What’s in there that can come out? Toss out the four bowling balls, the barbells and the lead-lined box of plutonium fuel rods.

You should also remove anything that causes additional drag. Creating aerodynamic drag is similar to adding weight in that it increases the demand on your engine, so think about removing the big, flat bug shield that sticks up above your hood.

Remove any roof racks you’re not actively using, and take the cargo carrier off the top of the minivan. We know it gives you some hope of looking cool, like you do something besides haul kids around, but it’s killing your gas mileage and making your engine work harder.

Change Oil and Other Vital Fluids

What fluids are we talking about? 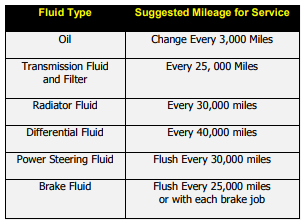 Windshield washer fluid? Not so important. Blinker fluid? There’s no such thing. We just wanted to make sure you are paying attention. 🙂

Your car’s fluids will often be changed during regular service intervals, but it’s important enough that we wanted to mention it separately. As you drive your car, and even if it just sits in the driveway, your car’s fluids degrade.

That’s a problem because each of the fluids in your car is vital to the long-term health of the engine, transmission, steering or brakes. Simply keeping the fluids topped off isn’t enough because over time they lose important properties — like their ability to remove heat and lubricate, as well as the ability to prevent rust and freezing.

Regular transmission and differential fluid changes are often overlooked, but this service is very important. If you really want to keep your car forever, get these fluids changed as needed or more often. Fresh, clean transmission fluid assures that your car’s drivetrain stays cool and uncontaminated.

Some cars, by the way, have two separate differentials. If yours is one, and make sure that both sets of differential oil get changed. It’s easy to overlook this particular service, but you do so at your own peril: A cooked differential can cost thousands of dollars to repair. Routine maintenance service to flush your transmission fluid and replacement is much less expensive.

Take Care of Your Tires

When was the last time you checked your tires’ air pressure? Don’t remember? Or maybe it was done the last time you had an oil change (or at least you hope it was). Most people don’t care about tire pressure because they don’t notice “anything wrong” with their vehicle. Well it may seem that way, until you’re forced to quickly slow down and/or swerve to avoid an accident, be it on dry, wet or icy pavement. 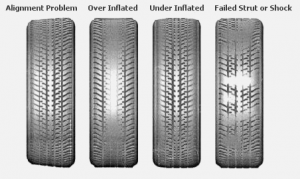 When a tire is under-inflated, most of the car’s weight is concentrated on the tread that’s located just under the sidewalls, rather than being spread out evenly across the full width of the tire. This means that as the tire rolls, the sidewall gets continually flexed (squished, if you will) and heats up. This affects both performance and safety. In addition to degrading the handling of the vehicle (via the mushy steering response courtesy of the flexing sidewalls), a tire that’s considerably low on air can blow out due to the stress from the heat buildup and the constant flexing of the sidewall.

A tire with a scalped tread pattern on the tire will cause a grinding sound at speed over 45MPH. This tire condition is caused by a combination of worn struts or shocks and or tire imbalance. If a tire is controlled unevenly the tire will vibrate causing the tread to contact the ground inconsistently. This inconsistent contact with the road causes the tire tread to wear unevenly. To check for this condition (called ―cupping‖ – example on the right) take your hand and pass it over the tire tread, it should be smooth. If high and low points exist the tire is cupped and needs to be rotated or replaced depending on the severity of the cupping condition.

Get Problems Checked Out Sooner Rather Than Later

This is like saying “Don’t let a cold turn into pneumonia.” If you have a small problem with your car, get it checked out sooner rather than later.

For example, a torn CV boot is a common problem and a simple repair. Delay getting it fixed, though, and you’ll eventually end up by the side of the road, unable to drive and forced to fork over some additional money for a tow and a whole new axle.

That’s just one example. There are many other problems that start small but balloon into something much larger if they’re not addressed right away. Don’t believe in this theory? Talk to the secretary of the Treasury Department.

Above all, make sure your car is safe to drive!

If you have any doubts about such things as brakes, brake lines, ball joints, tie rods, airbags, seat belts or even the structural integrity of your car, get it checked out.

Remember: Even though you want your car to last a long time, you still want to outlive your car.

What does a car regular maintenance entails?

Who holds the Guinness world record for the most miles driven by a single owner in a noncommercial vehicle?

Irv Gordon, a 73-year-old retired science teacher with his 1966 Volvo P1800, holds the Guinness world record for the most miles driven by a single owner in a noncommercial vehicles with more than 2.99 million miles.

What is a cold engine?

A cold engine is one that is sat for more than five hours. on the odometer.

What are the vital fluids/oil to change in a vehicle?